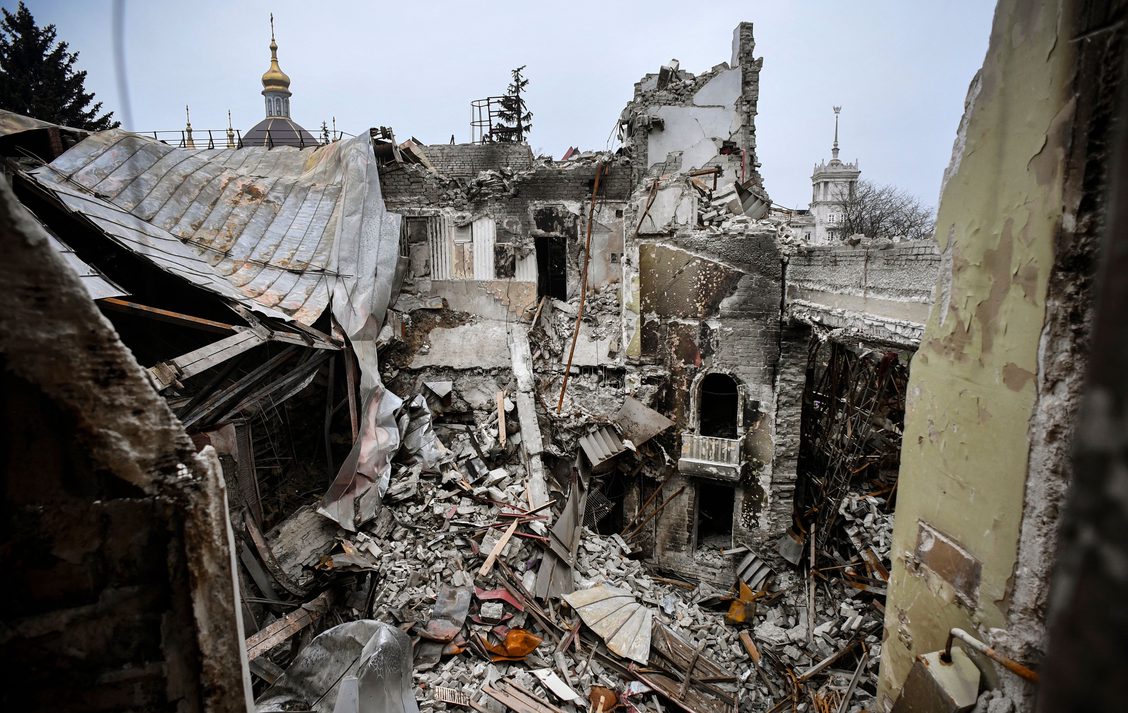 This picture shows the partially destroyed Mariupol Drama Theater, struck by Russian forces on March 16, in Mariupol, Donetsk Oblast, on April 12, 2022. Editor’s Note: This picture was taken during a trip organized by the Russian military. (AFP via Getty Images)

Russian military launches missile strike at Dnipropetrovsk Oblast. Governor of Dnipropetrovsk Oblast Valentyn Reznichenko said the oblast suffered an attack early in the morning on April 18, but that “60% of the missiles were shot down by Ukraine’s air defense systems.” There were two victims at an infrastructure facility that was hit and railway infrastructure in the Pavlograd district was destroyed, Reznichenko said.

Defense Ministry: Russians fail to launch large-scale offensive in Donbas as Ukrainian forces hold them back. Deputy Defense Minister Hanna Maliar said on TV that Russia is building up troops, equipment, and ammunition in Ukraine’s east but is failing to enter the new stage of the war because Ukraine’s armed forces are “powerfully holding them back,” Ukrainska Pravda reported.

Ukraine won’t give up Donbas to end Russia’s war. President Volodymyr Zelensky told CNN that Ukraine is prepared to defend Donbas against Russian forces in a battle he says could influence the course of the entire war.

UK intelligence: Although offensive shifts to eastern Ukraine, Russia’s ultimate goal hasn’t changed. According to the latest update by the U.K. Defense Ministry, Russia still aims to make Ukraine abandon its Euro-Atlantic orientation and assert its dominance in the region. British intelligence also reports that Russia continues to “redeploy combat and support equipment from Belarus towards eastern Ukraine,” which includes locations close to Kharkiv and Sievierodonetsk, a city in Luhansk Oblast.

Luhansk Oblast Governor: Over 100,000 residents left without gas, electricity. According to Serhiy Haidai, 37 settlements in the region are completely or partially cut off from gas supply due to the Russian shelling, while 32 settlements lack electricity. There is no water in Rubizhne, Popasna, and partly in Lysychansk and Sievierodonetsk, the governor said.

Ombudsman: Mariupol residents suffer from hunger. Ombudsman Lyudmyla Denisova cited UN data saying that over 100,000 civilians suffer from water and food shortages. Amid the 50-day-long siege of the city, the Russian forces haven’t allow any humanitarian convoys with food and medicine from Ukraine to enter, she added.

Zelensky invites Macron to Ukraine to witness ‘genocide.’ Zelensky told CNN that French President Emmanuel Macron wanted Russia to start some kind of dialogue on the war. He added, however, that Macron should visit Ukraine to realize that Russia had unleashed a genocide against Ukraine. Macron had previously refused to call Russia’s actions a genocide.

Intelligence chief: Putin unlikely to use nuclear weapons. The Russian dictator’s nuclear threats are blackmail, and the use of nuclear weapons is technically difficult, Kyrylo Budanov, head of Ukraine’s military intelligence, said on April 17.

Read our exclusive, on the ground stories

One onslaught, one family, one lucky chance: Surviving Mariupol theater bombing. Viktoria Dubovitskaya, 24, and her two children survived the Russian bombing of the Mariupol Drama Theater by pure luck. Like hundreds of Mariupol residents, Dubovitskaya’s family was sheltering near the theater’s main stage. Read our story here.

Historic loss of flagship deals humiliating blow to Russia’s naval power. The Russian-Ukrainian war has produced yet another hallmark event in the history of warfare. On April 14, after 49 days of Russia’s all-out war, Ukraine inflicted a devastating blow upon the Kremlin’s pride and the symbol of its naval power in the Black Sea. Read our story here.

400 new graves dug in Sievierodonetsk after start of Russia’s invasion. Luhansk Oblast Governor Serhiy Haidai urged residents to evacuate, adding that 20,000 people remain in the city. Before Feb. 24, there were over 130,000 residents. According to Sievierodonetsk Mayor Oleksandr Striuk, 70% of the city is destroyed.

41 bodies recovered from under rubble in Borodyanka so far. The State Emergency Service reported on April 17 that its rescuers have finished clearing the debris of five destroyed apartment buildings in Borodyanka, a town 40 kilometers northwest of Kyiv that was heavily bombarded and occupied by Russia for a month.

Russian military forcibly removes around 150 children from Mariupol. The Crimean Human Rights Group reported on April 17, citing an advisor to Mariupol’s Mayor Petro Andriushchenko, that many of the children were taken from hospitals and were not orphans. The children have reportedly been transferred in the direction of temporarily-occupied Donetsk and the Russian city of Taganrog.

European Commission president says Russia’s bankruptcy a matter of time. Ursula von der Leyen said in an interview with Bild am Sonntag that Western sanctions are eating their way deeper into the Russian economy every week. She also urged EU member states to supply light and heavy weapons to Ukraine.

Von der Leyen: EU to sanction Sberbank, not impose direct ban on Russian oil. Head of the European Commission Ursula von der Leyen told German newspaper Bild am Sonntag that the EU is not considering an outright ban on Russian oil, as the move will lead to shortages, rising market prices, and “ultimately strengthen Putin.” Von der Leyen said that the EU is “developing smart mechanisms that will allow oil to be included in the next sanctions package.”

Finnish Foreign Minister: Threats from Russia will not affect country’s decision to join NATO. In an interview with Finnish Yle news, the country’s Foreign Minister Pekka Haavisto said there is no reason to panic about Russia’s threats over Finland’s potential NATO membership. Haavisto also said that if Finland does submit an application for membership, it will happen in the next six weeks.

Belgium, Estonia, Bulgaria implement EU ban on Russian ships. As of April 17, Russian-flagged ships, including those that changed their flags to another nationality after February 24, will be prohibited from the countries’ ports, with the exception of ships in distress. The measures follow an EU ban on Russian ships from April 8.

Pope Francis criticizes Russia, says it’s ‘Easter of war.’ “Our eyes, too, are incredulous on this Easter of war. We have seen all too much blood, all too much violence,” said Pope Francis in his Easter speech. “May there be peace for war-torn Ukraine, so sorely tried by the violence and destruction of the cruel and senseless war into which it was dragged,” he said.

EU to provide Ukraine with additional 45 million euros in humanitarian aid. The funding is part of the 1 billion euros support package raised at the global pledging event “Stand Up For Ukraine” on April 8, the European Commission announced in a statement on April 17.