In the lead-up to Brexit, the Vote Leave campaign, and specifically George Eustice – now the DEFRA Minister – promised that farming would thrive if the UK left the EU.

In a new sovereign Britain no longer beholden to the EU, our UK standards, he promised, would be protected, there would be less red tape, and the government would not only take over subsidies, they would increase them.  He even produced leaflet about it. 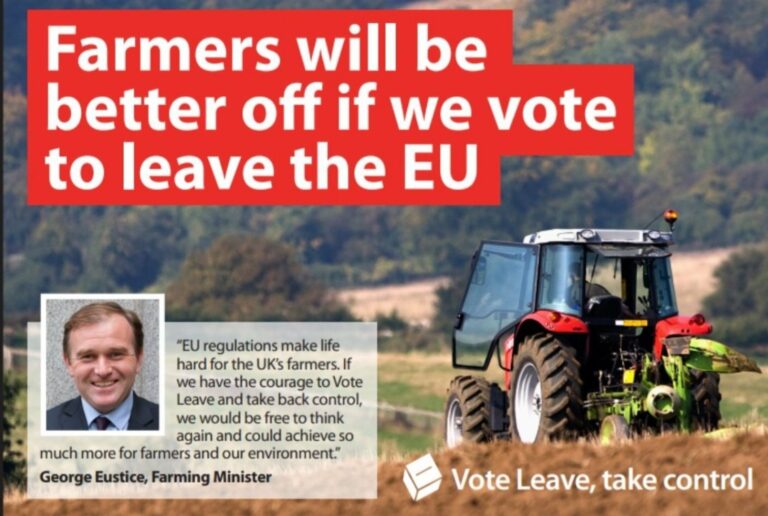 Farmers now know their subsidies are to be phased out, and rather than less red tape, there’s now more than ever.

So what about those standards?

“In all of our trade negotiations, we will not compromise on our high environmental protection, animal welfare and food standards.”

Yet when the government published the Agriculture Bill in the spring of 2020, those standards were nowhere to be seen.  Neither were they in the new Trade Bill.

Not a single, solitary mention.

Despite persistent lobbying of parliamentarians by Save British Farming and other farming-related organisations, despite the Lords adding amendments to include them on several occasions during the passage of the Agriculture Bill, despite a million strong petition by the public who in polls were over 90% in favour of keeping current standards, the government failed to add them to the Bill, promising they would personally safeguard them. [Ed: Never trust a Tory is a lesson still to be learned.]

Now we are at crunch time.  Up to this point, the government has so far merely rolled over deals we previously had via the EU.  So when it came to Australia – our first proper deal negotiated from scratch – there was a chance to show the world that sovereign Britain was a force to be reckoned with.

The government is not just desperate to show something positive has come out of Brexit after five solid months of bad Brexit news, it wants to get the deal done and dusted before the June G7 Economic Summit the UK is hosting this year.

The barrier to getting it done quickly is – you’ve guessed it – standards.

Australia, like the US, is able to keep the price of meat low by:

All the above at a time when UK farmers have worked incredibly hard to slash the use of antibiotics in food production.

Even though the government promised no food will be imported that doesn’t meet our standards[Ed: Another Tory ‘promise’. One can only wonder what dictionary they use], Boris Johnson, by all accounts, has decided that they should not be a barrier when it comes to signing off on the deal.

It’s possible he’s been advised that when push comes to shove, we don’t have the heft of the EU to prevent it.

Ask Mexico when they tried to fend off the US.

If we say no, Australia, together with the US and Brazil and every other country that wants to import food to the UK, will take us to the cleaners at the World Trade Organisation, and the UK won’t stand a chance against their combined might.

It turns out that the promise of sovereignty was a big lie.

Apparently, bigger is better – and more powerful.  We left the EU to regain our sovereignty and now, ironically, we have less than whilst a fully paid-up member.

The victim of this sorry saga will be the UK’s farming industry which, unable to compete with low quality, low welfare produce, will be decimated.

Liz Truss, who negotiated the Australia deal, has generously offered some help.  By phasing the deal in over 10-15 years it will, she says, “ease the pain” for farmers set to lose their livelihoods.  I’m sure they’re very grateful.